Hello there, again! For today’s post, I thought I’d share some of my favourite feel-good movies (duh, you read the title… or did you?). Let’s get into it, since this post will probably end up quite long!

This one is a recent favourite of mine, since I only actually watched it a couple weeks ago. Nonetheless, I love it so much, and I’ll definitely be rewatching in the future! This film follows the journey of Sophie (Amanda Seyfried) around Rome on a pre-honeymoon with her busy fiance. It explores how love has no age, and how it’s never too late to find your soulmate – trust me, it’s adorable.

“I’m sorry that people are so jealous of me… but I can’t help it that I’m popular.” Mean Girls has a place in the hearts of so many girls and women (men and boys, too!) across the world, and for all the right reasons!It tells the story of how a, previously home-schooled, Cady Heron (Lindsay Lohan) infiltrates the popular group of girls in her new high school, known as The Plastics.  It’s jam packed with witty one-liners, romance and everything you’d want in a chick flick!

If you’re any sort of romance film fanatic, you’ll more than likely love this, and if you haven’t already seen it, you definitely should get around to it! Widower, Sam Baldwin (Tom Hanks) and his son Jonah move to Seattle, where Jonah calls into a radio talk show, asking to help find his dad a new wife. Little does he know, engaged journalist Annie Reed (Meg Ryan) is listening on the other end.

Much like Mean Girls (although a lot more scandalous), American Pie is a hilarious comedy movie, and a must watch for anyone older than 15! Four high school boys make a promise to each other, that they will lose their virginity by the night of prom. Along the way, there’s a bunch of awkward encounters, painfully cringey talks with parents and the funniest characters! It’s rated an 18, so if you’re younger than 14, I’d steer clear of this one for a few years!

Another classic, starring Tom Hanks as 30-year-old Josh Baskin, after being transformed into an adult from being 12. It shows Josh as he meets all the experiences of adult life, from getting a job (even if he’s a toy tester) to romantic interests. A fun film for all the family to enjoy!

Who doesn’t love a good Disney movie? Tangled is easily one of my favourites, and I’ve watched it countless times. If you really don’t know (I’m assuming most people do?), Tangled is the animated story of Rapunzel, a Princess stolen from her parents by Gothel, an ancient woman who uses the magical powers of Rapunzel’s hair to keep her young forever. While locked in a tower, Rapunzel meets thief Flynn Rider, who takes her on an adventure to see the lanterns released on her birthday (the same as the “Lost Princess“). The love story of Flynn and Rapunzel is easily my favourite from any Disney movie!

Newly Engaged Sophie (Amanda Seyfried) feels that she needs to have her father with her while she marries her fiance, Sky (Dominic Cooper). The only problem is: there are three possible fathers. What’s the only reasonable thing to do? Invite all three of course! Donna (Meryl Streep), hasn’t seen any of the men since her younger years, so an encounter with them right before her daughter’s wedding is a recipe for near-disaster! If you’re a fan of musicals, this one is definitely for you! 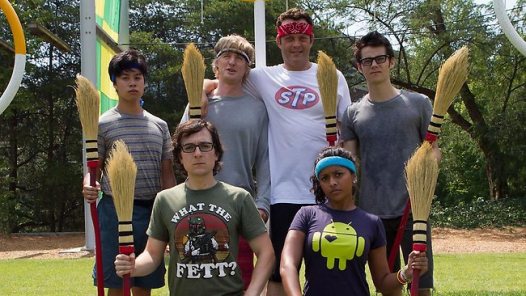 Salesmen, Billy (Vince Vaughn) and Nick (Owen Wilson) are struggling, so they apply for internships at Google, where they form an alliance with the younger “noogles” and go face to face with other teams in a range of challenges. It’s a must-see comedy if you ask me, although maybe not for anyone younger than 13, as the noogles take a trip to a pretty hectic party!

Another hilarious comedy movie, about the parents of Stephanie (Zoe Deutch) who travel to California to meet her and her tech savvy (but extremely troublesome) boyfriend Laird (James Franco). Stephanie’s father, Ned, immediately doesn’t approve of her choice in men, despite staying in his luxury home for the holidays. I watched this one a while ago, soon after it was released in cinemas, and enjoyed every moment!

Guardians Of The Galaxy

Peter Quill, also known as Star Lord (Chris Pratt) forms a group with unlikely ‘friends’: Rocket, Gamora, Groot and Drax after stealing an orb, wanted by the villain – Ronan. The five discover the power of the orb, and embark on a mission to save the universe, ultimately naming themselves the Guardians of the Galaxy. It’s easily my favourite Marvel film, and I’ve watched it so many times!

And those are some of my favourite movies that I’ll drift to if I’m bored, or feel like I need a little something to cheer me up! What about you? What are some of your favourites?