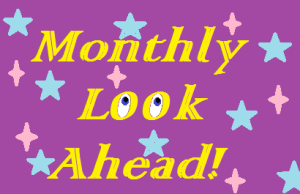 Can you believe it’s September already!? It hardly seems that long ago since New Year, and it’s been 8 months! Anyway, as always, with a new month, comes a new Monthly Look-Ahead! With a new academic year starting, a lot of these will be school-based, but I might squeeze a few other things in, too!

For those of you that don’t already know, high schools in the UK are separated into year groups numbered 7-11. Year 7s are 11 turning 12 when they start, and year 11s are 15 turning 16. So, 4 years after starting high school, my year group are finally the oldest! I don’t feel nearly as old as the Year 11s looked when I was in Year 7, it’s gone so fast!

Something that comes with starting Year 11 is senior badges. Everyone in the year group gets a little badge to pin to their blazer, and it’s kind of a way for the younger years to know that we’re the oldest, and they can come to us for questions about school and whatnot, but I like to see it as a “Well done, you’ve made it this far – only a bit more to go” kind of thing.

While I won’t be getting a new set of teachers (only in subjects where last year’s teachers have left), I still get a new layout for my lessons. Last year, the timetable was actually pretty good, so I’m hoping this year is as well!

No, not university. You might call it sixth form, but it’s basically the two years before university, where you take your A-Levels. It’s a big step up from high school, and I’m definitely nervous, but in the last few days I’ve been more excited than usual!

I have a few romance movies that I want to watch sometime soon. One was recommended by a friend, called ‘Before I Go’ I think, and the other is Safe Haven. I’ve seen the trailer for Safe Haven and it looks great! Let me know some of your favourites and I’ll add them to the list!

Leaves are already starting to change colour a tiny bit, and I’m so excited for Autumn. It’s easily one of my favourite seasons, where it’s darker in the evenings, colder, prettier colours – and I get to wear my warmer clothes. Who am I kidding, I’ve been wearing hoodies all summer anyway. This year, the UK hasn’t had the best Summer, if you ask me!

That’s everything I can think of for this month! For those of you wondering, I’ll be back at school on Monday, so only 3 days to go! 😦